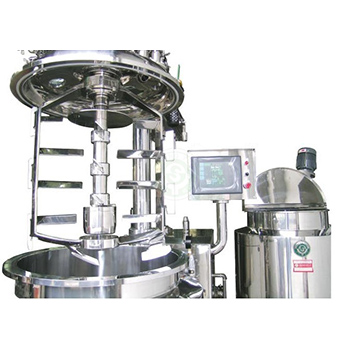 The Automatic Vacuum Emulsify Mixer (SY-HME) has one blades-mixer for high viscosity material mixing and one high speed homogenizer for emulsification. The blades-mixer has scrappers to scrape the material stuck on the inner surface of mixing bowl to prevent dead corner from happening. The blades-mixer produces downward current to mix and push material going through homogenizer continuously.

The homogenizer head of the Automatic Vacuum Emulsify Mixer consists of high speed rotor and stator. There is pressure difference produced by the high spinning of rotor and stator, inside the homo-head from bottom to top. Shearing, breaking, mixing and emulsifying are happening during the material going through homo-head. The emulsified material is gushing out from the top of the homo-head and coming back to the homo-head again by the down force of blades-mixer when the upward force fading away.

Based on the aforementioned description, The Automatic Vacuum Emulsify Mixer(SY-HME) is widely applicable from high to low viscosity material.